The Saint Paul’s Lutheran Church can be traced back to the time when this area of the country was settled. According to tradition in 1829, Reverend J. D. Schuh began ministering to Lutherans in this vicinity. At that time there was no formal organization in existence.  Yet it seems that the evidence suggests those early settlers who had been raised in the Lutheran church would come together and meet at a brick schoolhouse for worship. The Rev. Schuh ministered to these people for about a year or so.

Then in 1831, Reverend Schuh’s was succeeded by  Rev. J. Stough, also known as “father” Stough. He came to the Bucyrus area as a missionary from Germany. Under his administration, the first Lutheran congregation was organized. Accurate details are sketchy at best since there seems to be no official documents that have survived from this time.  In the beginning the worship services were conducted in German simply because that was language everyone had learned. About 1832, a wave of German immigrants came directly from Germany to settle in Ohio including Crawford County. On December 1, 1832, there was a meeting of Lutherans and they voted extended a call to Rev. Francis J. Ruth of Ashland, who had been coming at from Ashland for a period of time and had been preaching in English to the Lutherans.

The first church council was elected and installed in 1833.  Soon the congregation outgrew the little brick schoolhouse. They moved to the county courthouse and worshiped there until they could build a church of their own.

In 1835 the trustees purchased, for $400, the lot located on the corner of E. Mansfield Street and Walnut St. The cornerstone was laid on August 20, 1836. By this congregation officially called St. Paul’s Evangelical Lutheran Church.  Some records indicate that it was a matter of special pride that this congregation had the first church building in town adorned with a steeple.

In 1842, a German element decided to withdraw from the Saint Paul’s. It seems there was a division along the lines of language.  So the English Saint Paul’s provided a financial arrangement so the Germany portion could secure a separate worship. There are a few who still refer to the original Lutheran congregation “the English church” and daughter congregation “the German church.”

The two congregations continued to worship at the same building at 130 South Walnut 1857, when it was torn down to make way for a newer large facility to accommodate the increasing attendance. 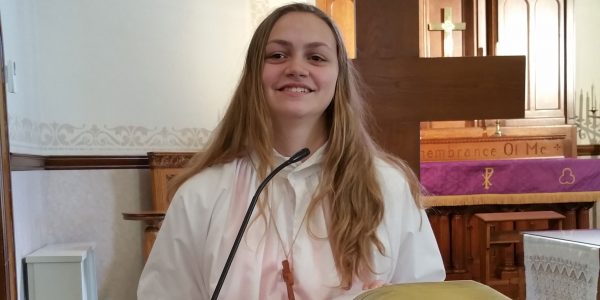